The purpose of this page is to share information on the subjects of embryo adoption and embryo donation. This venue is made possible by support from the U.S. Department of Health and Human Services under grant #1EAAPA091015-01-00. The statements expressed herein are those of the National Embryo Donation Center and do not necessarily reflect the views of the Department. We ask that participants stay on topic, and exercise mutual respect for their fellow participants. All posts and comments are subject to approval by NEDC New Media staff.

John Luke is three months and 13 days old today. As to be expected, he has had some milestones recently. He rolled to the side for the first time last month; and this month, is already starting to teethe. It’s hard to believe.

He has been a finicky eater lately, which is unusual for him, and he has been drooling constantly the last week or so. When he was a newborn, one of the signs I knew he was hungry again; was he would start sucking and putting his hands in his mouth. Now, even when he has just eaten, or refuses to eat, he is constantly sucking on his fingers.

I offer a paci, but he prefers his hands. He is definitely going to be a thumb sucker. I’ve been advised to discourage this; however, there is nothing cuter than a baby sucking his thumb. Besides, it soothes him, so I don’t see any reason not to allow it. There will come a time to break the habit, but for now, it’s his favorite way to self soothe.

I don’t even think John Luke wants to be a baby. He acts like he already wants to walk. I think he would drive the car if he could. His favorite pastime, is to stand on our legs, while he’s in one of our laps. He bobbles around like a little surfer dude and laughs with this little side grin. He’ll put one foot in front of the other, as if, he is trying to walk on the top of our legs.

I think I’ve had a few milestones of my own. A reality check is one of them. When you’re in your 40’s, before you’ve had your first child; you’re used to doing things on your timeline. I just thought that I didn’t have time, before I had a child; now I realize what a valuable resource time is. I am learning to use it wisely; not to waste as much time dilly-dallying, so I can enjoy the special moments. To move with a purpose. I don’t want to be” too busy” to let these moments with John Luke to pass me by. It gives a whole new meaning, to doing a load of laundry “with a quickness.”

A friend encouraged me to video his cooing sounds. She said, “Because one day, out of the blue, they will be gone, and you can’t get them back.” The other day while playing with him on the floor, he was “talking” and making all kinds of noises. I remembered what she said. I fought the urge to rush through this moment, and get back to cleaning the dishes which I had started, but not finished. I got back up to finish them, and instead went and got the camera. The dishes will always be there. If I’m not careful, the next thing I know, he will be asking to drive the car. 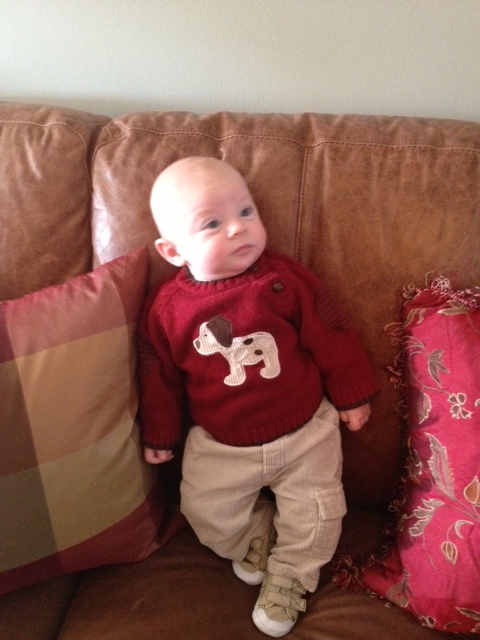